The Vision Ministry International (TVMI) is a team of Holy Spirit filled believers in Christ who have been set apart to minister the word of God through preaching, teaching, and song.  We have been graced by God to continually grow and expand the ministry to local and nation-wide churches, prisons, youth camps, children’s group homes, special events, such as the annual City Park Party held in Liberty, Texas, and soon to be international locales.   The TVMI team, under the direction of Rev. Del Mar and Charlotte Coward, continue to exemplify in words and actions the command of our Lord and Savior Jesus Christ found in Mark 16:15, “And he said unto them. Go ye into all the world, and preach the gospel to every creature.”

Pastor Mike Glazener was newly pastoring Cornerstone Church, and during that morning service passed out a handout to the congregation that confirmed precisely the vision that the Lord had just given Pastor Delmar for the outreach, thus birthing The City Park Party.

In September 1998, Pastor Delmar and The Vision Ministry team hosted the first annual City Park Party at the Municipal Park in Liberty, Texas.  Over the past 24 years, this event has grown from a small gathering of local believers and ministries to seeing literally hundreds in attendance and believers and ministries from all over the United States.

The City Park Party is held annually on the second Saturday of September at the Liberty Municipal Park in Liberty, Texas.

23 years ago Rev. Del Mar Coward was attending a regular Sunday morning service at his home church, Cornerstone Church in Liberty, Texas.  During the praise and worship service the Lord spoke to Rev. Del Mar and told him to get a pen and a piece of paper, He wanted to talk to him.

Rev. Del Mar began writing and drawing and when complete, he was quite puzzled at first.  He then realized that the Lord had given him a specific plan for an outreach that was to be birthed in Liberty County. 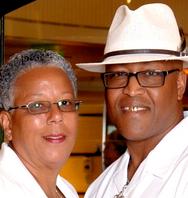